Four years ago, in February 2009, a team of students from RMIT completed the first production survey for Smap. If I recall correctly around 100 households were surveyed in Cambodia.  The students did a great job getting the system working in particular with the Khmer script.  This survey was for World Vision and Tim Costello was kind enough to write a nice letter in thanks. 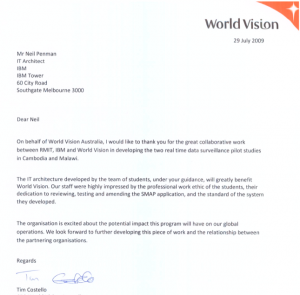 Since then IBM has dropped out of the project, or to put it another way, I left and started Smap Consulting.  RMIT and World Vision are still very much involved.  And now, just over 4 years later, I think we have hit something of a milestone 23,000 surveys were submitted onto Smap hosted servers in the last 100 days.

It seems the technology may have reached a tipping point where it is much cheaper, easier and more effective to conduct assessments with mobile phones instead of paper.