When you add a notification, such as an email alert or forwarding of data to another server, you can now specify a filter so that only matching results generate the notification. 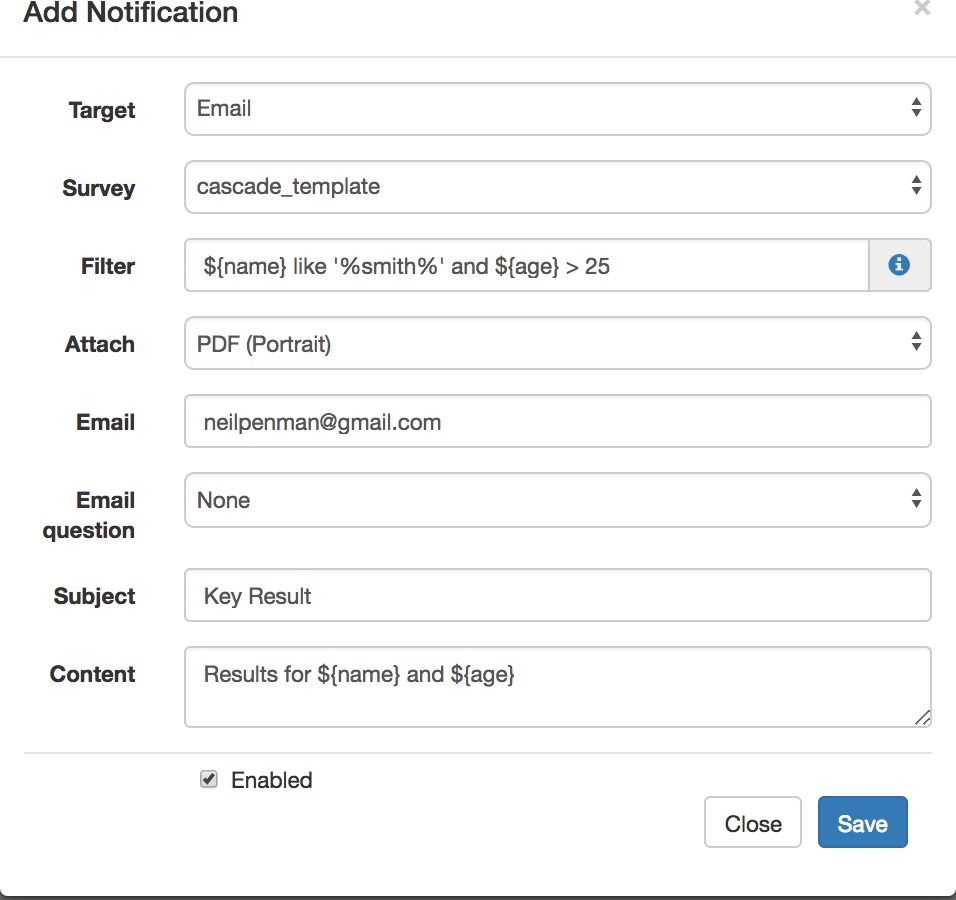 In the above example a PDF of the results will be emailed if the name contains the characters “smith” somewhere and the age is greater than 25.  You can get more details on the syntax of these filters by clicking on the (i) icon to the right.

Note that the name and the age has also been included in the body of the email along with the PDF for the results.  You can embed any question answer in either the subject or the content of the email.

Artificial Intelligence has now been build into Smap!  In the parameters of an oversight form you can now add “auto=yes” to questions that refer to an image.  That image will then be processed by Amazon Recognition to identify objects automatically.  For an example of how to process an image in an oversight form refer to this article.

In this release we have improved support for translating answers to questions from one language to another.  For example from French to English.  You can use the same feature to facilitate transcribing to text from an audio recording or a video.

Specify the source parameter in an Oversight form

For example if you have an audio question called q2 and you want to write the translation into a column called audio_transcription, then you can write your oversight form as shown below.

The parameter source=q2 has been added to the audio_transcription column.  Clicking on a record in managed forms then shows a page similar to the one below where the user can play the audio and write the translation.

You can also reference:

Parameters for oversight forms are new in version 17.09.  Other parameters are:

A new result type of “Upload Errors” has been added.  The background to this is that previously a change was made to the monitor to show errors that occur when the results of a survey are submitted and are reported back to the phone or webform.  Commonly these are due to a survey being blocked or deleted. However these errors are generally fixed directly by the users.  For example they will see an error on their phone because the survey is blocked.  The survey will then be unblocked and the user will re-submit.  All is good.  However the monitor page will then show 1 succesfull upload and 1 error.

It is still useful to see if there have been any errors in uploading results.  The new type of “Upload Errors” shows these.  These errors are just informational and should align with errors reported on the phone.   The “Errors” column will continue to show uploads that were accepted by the server but then  for some reason failed to get applied to the database.  These are the sort of errors where you might say “where is my data?” and are more significant.

The second change made to the monitor page is to always show the latest name of a survey.  Previously if you submitted 10 results to a survey then changed its name then submitted 10 more you would see two rows for the two survey names with 10 uploads each.  Now you will see one row and it will be for the latest survey name and have 20 uploads.