Announcing the release of Smap Server version 14.02.  The major new feature is that multiple organisations can now be put on a single installation of Smap, so called multi-tenant.  The administrators or analysts in each of these “organisations” cannot see projects or surveys in any other organisation however within each organisation the administrator can still create projects and users.

When you install the Smap server it will create a user with a login id of “admin”.  This user has the “organisational administration” role. 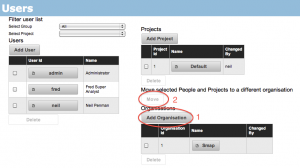 Export surveys with location as KMZ or VRT

Two new export formats have been added in this release.  Due to the increasing number of format options the radio buttons that were used to select the format have been replaced by a drop down selection.

Check on maximum questions per form

There is a limit of 1,600 columns in each database table.  Because the results from each form are put into separate database tables then this imposes a limit on the size of each form. Each question is stored in its own column and also each option in a multiple choice question gets its own column.  10 columns have also been reserved for the unique key, key to the parent table, start date, end date, device id and user identifier.

When uploading a template the server now checks the number of questions and multiple choice options and will report an error if there are too many. 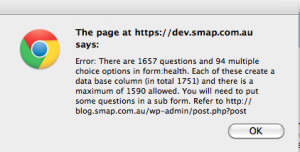 Fortunately it is straightforward to move excess question into another form and this should not affect either data collection or analysis. More details here.

The default installation no longer requires a user to have a valid user id and password to view an attachment such as a picture.  Instead each attachment has a name created from 28 random characters.  For example: 4e2252ad-39db-46cb-b50d-aubb94ca353a.PNG. This will simplify integration with other systems while still preventing unauthorised access to attachments.

There are 3 roles that can be given to users od Smap Server:

Hence you can restrict a user from accessing surveys that they are not involved with, by putting surveys into projects.  Users can then be assigned only to those projects that they are allowed to access.  As long as the user does not have the admin role then they will not be able to give themselves access to other projects or create new projects.

An issue with the current solution is that you may have multiple areas of your organisation that work independently hence you will want to create a user with the “Admin” role for each area.  But these admin users will be able to view and delete survey data collected by other areas.

The next release of Smap Server (14.02) due in late February will address this issue by adding the concept of an “organisation”. Even admin users, within 1 organisation will have no access to data in other organisations.  You will be able to create an organisation for each area of your company.