With this feature you can have a single table of data and multiple forms contributing to it.   Each form can have unique questions so that it is the only form that provides answers to those questions but each form can also answer questions that are also answered by other forms.  To help you work out whats going on in your results there is a new “informational” column that shows the name of the form that contributed each row of data.

If seems a bit confusing then you probably don’t need it.  For assessments it is still good practice to only have one version of one form used by all data collectors.   However some potential uses for this new feature are:

The following You Tube video demonstrates how to use this feature.  The scenario is for a medical clinic where the patient first enters some of their details and then the doctor expands on the patient record with a diagnosis.

Basing a new form on an existing form

When you create a new form in the editor you can select a checkbox to base it on an existing form.  By default this form’s data will go into its own table, unless you further select the checkbox to “share results”.

Some of the services from the KoboToolbox API are now supported.  More information is available form the Smap koboToolbox API help.  If you are developing applications that have to work with both Smap Server and kobo then this API may be useful.  Contact us if there are specific API endpoints that you need for your application.

This feature enhances Smap’s conformance to standards.  The main standard we use is JavaRosa which specifies the services that a mobile device uses to connect to the server.  This means that you can use any ODK compatible device with Smap including odkCollect and GeoOdk as well as fieldTask.  The kobo toolboxApi specifies services to access collected data and administer the server.  Hence you should be able to use software built with these services with the Smap server.

Version 15.12 of Smap is here.  It contains the long awaited Beta version of the online editor.  You are welcome to try out this editor both for the purpose of creating new surveys and also to edit a survey that has already been loaded.  However it is beta software and, due to its complexity, more than usually buggy.  We will be working on these bugs over the next few releases and also adding some more advanced functionality.   If you find any bugs yourself send me an email with the details. 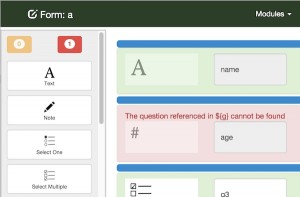 The new features are:

Yes finally an online editor for Smap.  This will allow you to:

More details on the features are available here. The editor is a work in progress and there are still some things that either have to be done in the xlsForm editor or where its still simpler to use that editor. Using the export to xlsForm feature you can switch between editors depending on which is easier.

Self Registration on the Smap Shared server

You can now register your own organisation to use the Smap shared server. https://sg.smap.com.au.  Use of this server is free however it is restricted to “Not for Profit” organisations and individuals.  Support is available for $50 per month if you want it.  There is a “register” menu option on the home page.

Here you can load:

In previous versions of Smap if you named a question using characters that could not be used in the database column name they would be changed.  So “q1.4” would become “q1x4”.  This no longer happens so you will see the question names unmodified.